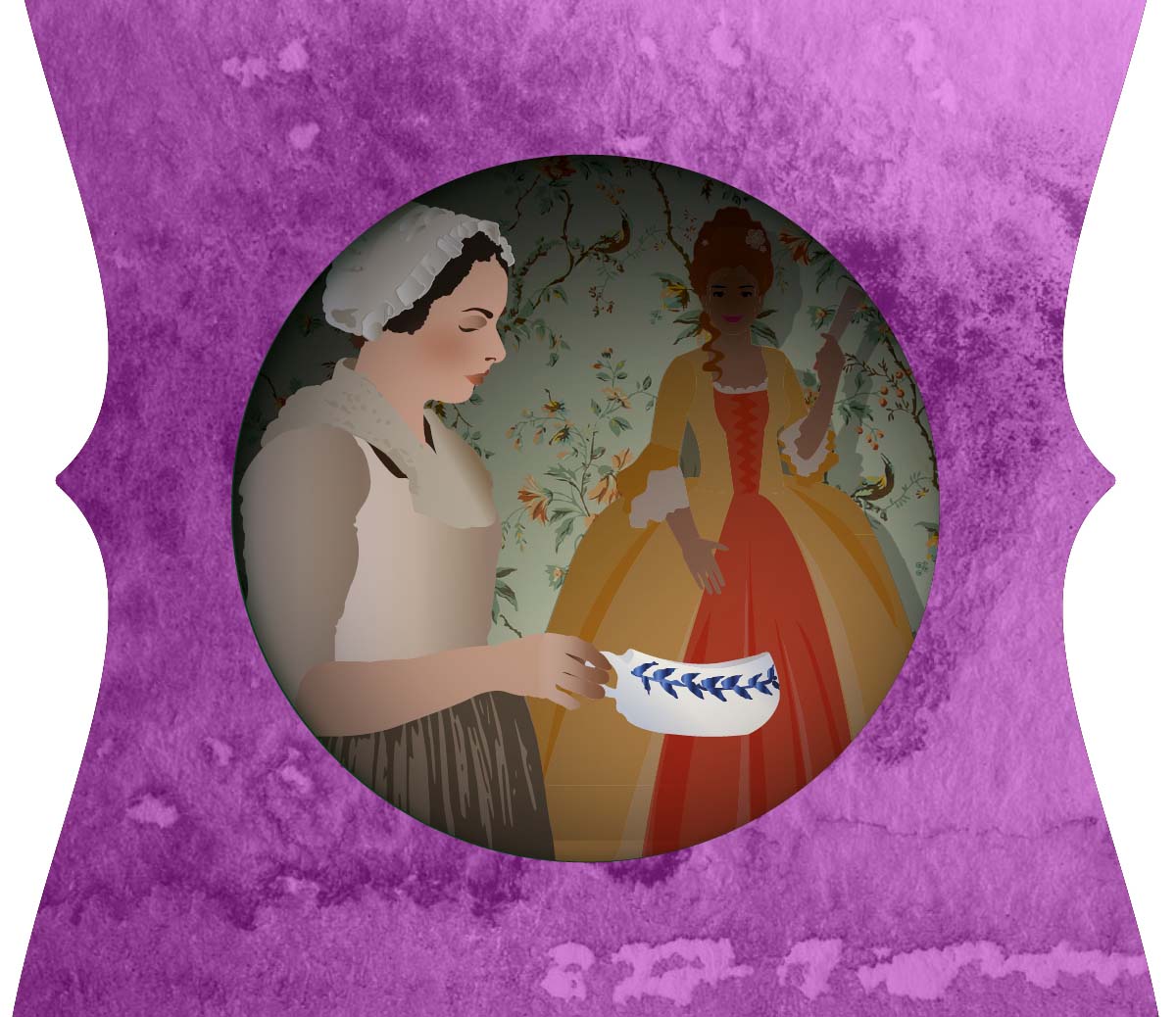 To the French, this practice provided yet more proof that the English were a race of philistines. During a visit to Suffolk in 1784, François de la Rochefoucauld was appalled at the ‘indecent’ custom of using the ‘sideboard to pee.’ Yet, not everybody was so circumspect, the highest in the land being the worst culprits: Charles II frequently piddled on the staircase or in the fireplace in full view of his courtiers.

But that’s enough about men. What did women do to relieve themselves during long, dreary banquets? Dresses in the seventeenth and eighteenth centuries came armed with layered petticoats and floor-skimming underskirts. How on earth did you empty your bladder in a discreet fashion? Enter the bourdaloue – the 18th-century equivalent of a pee-funnel. Possibly named after the pastor Louis Bourdaloue, whose sermons were reputed to be as long as they were tedious, the bourdaloue was a china jug-shaped pot resembling a gravy boat. With no knickers to get in the way, you’d clench it between your thighs – which must have been excruciating – or (if made of leather) it was tied to your waist and dangled on ribbons.

Though, in some ways, this might seem relatively low-key, what about the noise and the stench? At the Georgian court, the French ambassador’s wife regularly irked her fellow courtiers due to the ‘frequency and quantity’ of her she-weeing, ‘at least ten times a day amongst a cloud of witnesses.’ Even worse, what if you were stuck in the middle of a dinner, unable to leave, and your jug urgently needed emptying? Naturally, accidents occurred. One woman at George III’s court was mortified when a pool of pee crept out from beneath her robe and ‘threatened the shoes of bystanders.’

Obviously, things couldn’t continue like this, at least, not for those with the money to do something about it; privacy was fast becoming an urgent necessity. Thank God for the advent of water-closets. Though the first patent was taken out by Alexander Cummings in 1775, we’ve still no idea whether he reinvented the WC, or stumbled on an old design, claiming it as his own. In the late 1580s, Sir John Harrington, godson to Elizabeth I, had come up with a prototype for a water-closet and got the Queen to test it. Though Sir John placed a one of his gizmos at Richmond Palace, Bess shunned it and went back to her beloved close stool. So that was the end of that (at least for the next 200 years).

With the invention of heating systems in the 1830s, the ability to pee and poo in private at last became available within two new warm rooms – the bathroom and WC or, as it was euphemistically known, the ‘loo’. The origin of the phrase dates back to the 1880s and a certain Lady Louisa Anson. At house parties, it was the custom for visitors to have their name written on a card inserted in a holder on their bedroom door. During one such weekend, a gang of kids decided to play a trick on the intimidating dowager, stealing her card and sliding it into the holder on the water-closet door on the same floor. Lady Louisa was not amused when the maid repeatedly mis-delivered her morning tea to the WC. From that moment on, people began using the expression ‘I’m off to visit Lady Loo’. Soon it became abbreviated to ‘I’m off to the loo’.

Before long, the wealthy started building water-closets and bathrooms on to their dressing rooms. By 1844, the Duke of Buckingham installed at least nine water-closets, a shower bath and four bathrooms at his country home, Stowe. Designs for these water-closets were surmounted by a ducal coronet. A natural progression from the monogrammed close-stool favoured by Henry VIII, now an Englishman could visit the lav, wash himself and get dressed in splendid isolation, before adjourning to the liberating atmosphere of his private study. Meanwhile, his wife could bathe, then retire to her boudoir to the peace and comfort of her chaise longue.